Xinhua Winshare Publishing and Media Co., Ltd. (henceforth "Winshare") was founded by Sichuan Xinhua Publishing Group in 2005. Listed on the main board of Hong Kong Exchanges and Clearing Limited in May 2007, becoming the first mainland Chinese publishing company to list H shares. Winshare acquired the 15 subsidiary printing companies of SCPG and unblocked the publishing industrial chain in August 2010, thereby completing its publishing industry chain.Xinhua Winshare was successfully back to A-share in August 2016，becoming the first domestic publishment and media company which is on both A- and H-shares. As a member of the first group of accomplished corporations in China's cultural system reform, Winshare's efforts in reform and development have always been at the forefront, and the company is renowned as a vanguard of the Chinese publishing sector, a leader in the publication and media industry of western China and a preeminent cultural enterprise of Sichuan.

With the glorification of Chinese civilization and guidance of industry development as its missions, Winshare focuses on and operates the entire publishing and distribution industry chains through investing in publishing, periodicals, printing and production, logistics, store management, e-commerce, education services and other areas. The 12 book and electronic media publishing units and 13 newspaper and periodical brands consistently create superb contents. More than 150 retail stores provide province-wide coverage, 114 subsidiaries form an education subscription network, and over 800 retail locations in department stores and supermarkets across the country combine into an expansive physical sales network. With Chengdu, Beijing and Wuxi as key nodes, Winshare established a national logistics and distribution network that will firmly support the rapid development of the company's online and offline businesses. Winshare's printing and production segment and sales of printing material both dominate their respective markets in southwestern China. While reinforcing core competitive advantages in traditional publishing, Winshare also established a resounding online presence via the winxuan.com and 9yue.com websites, as well as a cloud platform for publishing and distribution services, propelling Winshare as one of the top brands in publication e-commerce in the country and facilitating the transformation andupgrade of China's publishing and distribution industries. Winshare is respected as the main engine behind the informatization of China's education sector, having developed the nation-leading "U-Class" digital classroom and launched a cloud platform dedicated to Sichuan province education resources. While cultivating its publishing and distribution core businesses, Winshare has also entered the cultural entertainment sectors in areas such as film, television, arts and music. At the same time, the company has taken a proactive stance in promoting culture to "go abroad", facilitating the combination of culture and finance, undertaking capital operations, expanding into new markets and creating new profit growth points, all of which will underpin future development.

With a vision for the future, Winshare will commit to two transformation strategies, changing from a single-track publishing and distribution company into a comprehensive publishing and media group with command of the full industry chain, and changing from a traditional cultural industry enterprise into a modernized cultural services conglomerate. Winshare cultivates its core competency by emphasizing market competitiveness, cultural influence and industry expansiveness, and strives to position itself as a comprehensive cultural services conglomerate with strong core businesses, in-depth know-how of the industry and international influence. 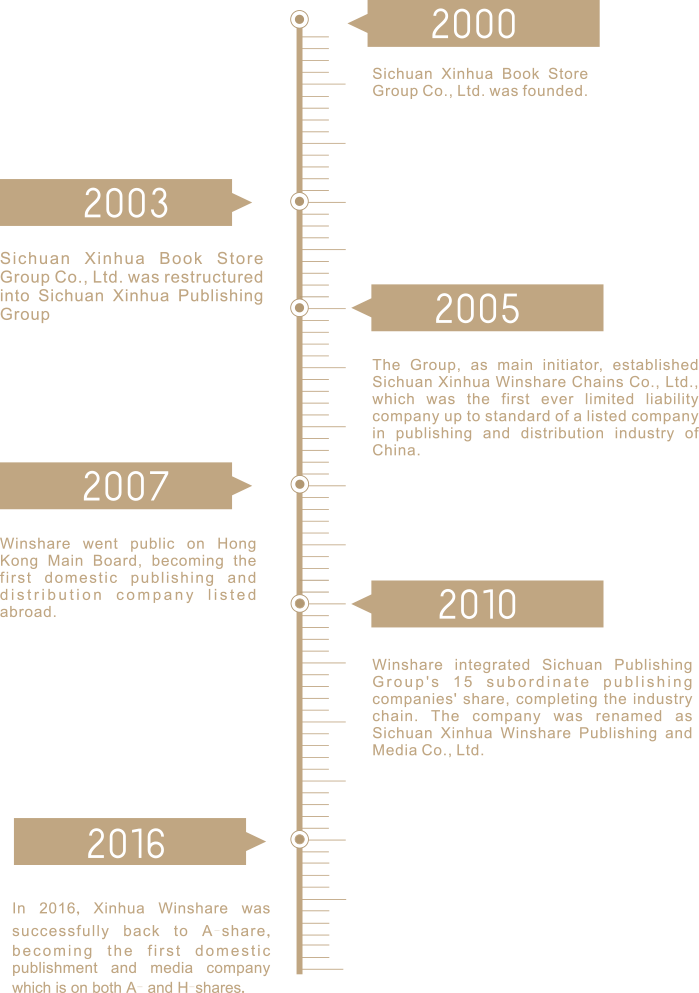